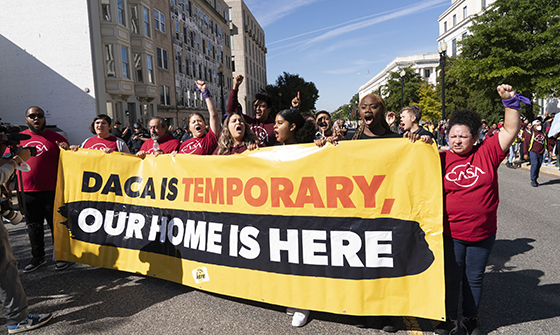 People rally outside the Capitol in support of the Deferred Action for Childhood Arrivals (DACA), during a demonstration on Capitol Hill in Washington, Thursday, Oct. 6, 2022. ( AP Photo/Jose Luis Magana)

The Biden administration is none too happy.

There are about 600,000 mostly Hispanic adults – frequently called “Dreamers” – whose illegal immigrant parents brought them into the United States when they were small children. The United States is the only country they have ever known.

The case that wound its way to the Fifth Circuit was the result of a suit against the federal government in the wake of a 2014 Obama-era program that was called DAPA, an acronym for Deferred Action for Parents of Americans. DAPA eventually led to DACA. – the Deferred Action for Childhood Arrivals. The suit was spearheaded by Texas and joined by a number of other states.

The purpose of DAPA was to prevent the deportation of immigrants who, after having entered the United States illegally, had children while in the U.S. Under the law, those children are U.S. citizens. Simply put, DAPA sought to keep a U.S. citizen minor child from having his or her parents deported.

The purpose of DACA was to prevent the deportation of adults who were brought into the United States when they were children.

The essence of the Fifth Circuit’s ruling says that DACA, having never been voted on by Congress, constitutes overreach by the executive branch. The upshot of the ruling is that no one else can enroll in DACA but that current DACA enrollees may retain their status. For now.

I have sympathy for someone who was brought to this country as a child and who has now reached adulthood having never known any other home. I personally know a couple of such individuals. They are as American as you and I. They speak unaccented English. They listen to the same music that yours and my children listen to. They watch the same shows on TV and on Netflix.

In the cases of the two that I know, they are both college graduates who are holding down white collar, good paying jobs. They are paying taxes the same as you and I.

I cannot imagine telling these two that they must go back to Mexico. They have no real standing in Mexico. Mexico is to them what Mexico is to you and me, a foreign country.

I believe that reasonable people can come to a reasonable accommodation for these individuals. Such was the belief, however, in 1986 during the “Reagan amnesty.” Nearly three million illegal immigrants were given permanent status in return for “bipartisan agreement” that the border would be secured.

The memory of the Reagan amnesty failure is still fresh. Republicans paid a price for allowing themselves to get rolled. Democrats simply want to import a reliable voting bloc that will assure a permanent Dem majority in Congress.