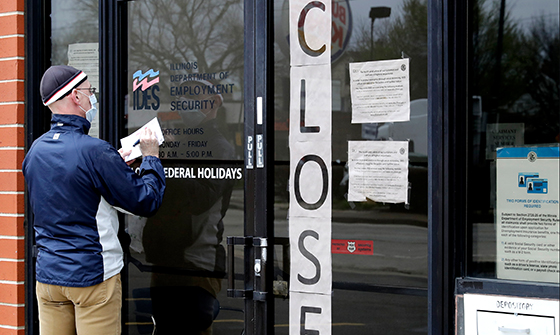 FILE – In this April 30, 2020 file photo, a man writes information in front of Illinois Department of Employment Security in Chicago. U.S. businesses cut an unprecedented 20.2 million jobs in April, an epic collapse with coronavirus outbreak closing the offices, factories, schools, construction sites and stores that propel the U.S. economy. The Wednesday, May 6, report from payroll company ADP showed the tragic depth and scale of job losses that left no part of the world’s largest economy unscathed.  (AP Photo/Nam Y. Huh, File)

Today marks the anniversary of the declaration of the coronavirus pandemic by the World Health Organization. It was this time last year that we began shutting down daily life and surrendering our basic liberties.

We were told that we could not leave our homes, go to our jobs, send our children to school, go to church, socialize with friends, have dinner in a restaurant, go to a sporting event, hold a wedding, hold a high school graduation, have a funeral for a loved one, visit our parents, send flowers to a sick friend, get a mammogram, have our teeth cleaned, get a haircut, go to the gym, shop in stores (save for those deemed “essential” by government officials), play golf, go swimming or have a picnic in the park.

Unless our daily work was considered “essential” (by the same people in government who got to decide which stores could remain open), we were told that we must put the earning of our very livelihoods on hold.

One year ago, today, the greatest government-mandated curtailment of personal liberty in the history of the United States began.

And we went along.

Untold numbers of books will be written on the Great Pandemic of 2020. This episode will take its place in the history books alongside the American Revolution, the Civil War, World War II and 9/11.

What I fear will be written in those books is that 2020 marked a point of inflection for American citizens with respect to their fundamental beliefs about the tradeoffs between safety and liberty. I fear that those in politics and government who are bent toward power for power’s sake – a cohort that is much larger than most people realize – were surprised, and pleasantly so, at just how willingly ordinary Americans surrendered their freedom.

When the pandemic began it was appropriate to implement prudent measures aimed at minimizing illness and death. But a total lockdown will likely prove to have been a bridge too far. As the backlash to Gov. Abbott’s lifting of mask mandates and business capacity limitations reveals, lockdowns in the name of safety have resulted in a subsequent requirement that safety be guaranteed as a condition of returning to life as we knew it. Since no such guarantee can ever come, I fear that life as we knew it never will either.

A year after the dawn of COVID, the words of John Adams echo. Liberty once lost is lost forever.