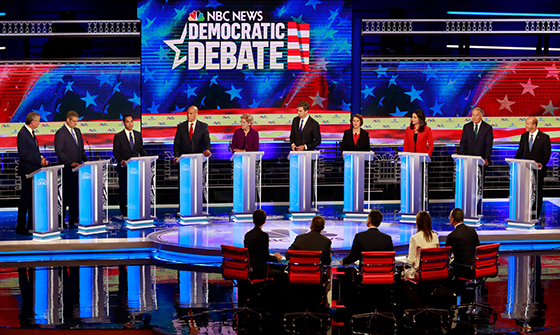 My grandfather, Lewis N. Carrell, was a working-class man who raised a family during the Great Depression. He died in 1969 having voted a straight Democrat ticket his entire adult life.

OK, fine. So, then, what about comparison even to the much more recent Democratic Party that elected Bill Clinton? This gang of Democrats is radical even by those standards.

When my grandfather was alive, abortion was a topic not suitable for polite company. By 1996, when Clinton was running for re-election, abortion was a nearly unavoidable topic. But even so, Clinton still said that abortion should be, “…safe, legal and rare.”

Fast forward to Wednesday night. The Democrats were elbowing each other out of the way to stake out the farthest left position on the subject. Democrat views on abortion go to places that were unimaginable even as recently as Bill Clinton’s re-election campaign.

Today, if you’re a Democrat and want to have any hope of being the nominee, it’s not enough to simply support unrestricted abortion on demand. You have to zealously promote it. Safe, legal and rare be damned. To this group of Dems, abortion is the inalienable right – if not the duty – of any pregnant woman right up until the very moment of natural birth – and beyond. It gets even more crazy. Texas’s own Julian Castro reminded us that we must provide state funds for the abortions of “female trans people.” (You can’t make this stuff up.)

Moving to immigration; whatever opinions Lewis Carrell had on the subject, it is absolutely certain that none of them included completely open borders. He had enough common sense to understand that you can’t let hundreds of thousands of poor, unvetted migrants just stream into the country every month. No such common sense among the Dems on the debate stage Wednesday, however. To Dems seeking the presidency, lawlessness is apparently preferable to even a semblance of order.

There’s so much more if only we had time.

Suffice that the Democratic Party of my grandfather was led by the likes of Harry Truman, Sam Rayburn, John Kennedy and Lyndon Johnson – all men of the left but substantial men, nonetheless.

Lewis Carrell would be appalled.