The media avoids yet another big story. 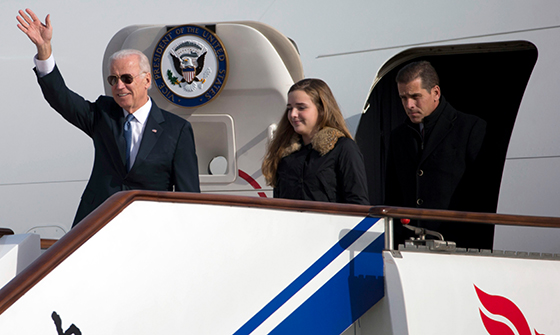 FILE – This Dec. 4, 2013, file photo shows U.S. Vice President Joe Biden, left, arriving on Air Force Two in Beijing, China, with his son Hunter Biden, right, and his granddaughter Finnegan Biden. As the Vice President travels to Ukraine Saturday, June 7, 2014, his youngest son, Hunter, 44, has been hired by a private Ukrainian company that promotes energy independence from Russia, but is commercially active in the breakaway Russian-backed state of Crimea and owned by a former government minister with ties to Ukraine’s ousted pro-Russian president. (AP Photo/Ng Han Guan, Pool)

The New York Post published a story Wednesday saying that according to emails found on a laptop computer that Hunter Biden took to be repaired and then never picked up, Hunter sold access in 2014 to his dad, Joe Biden, who at the time was Vice President Biden.

The customer was a Ukrainian businessman and advisor to the board of directors of the Ukrainian energy company Burisma. If the name Burisma rings a bell, it’s because it’s the same company that paid Hunter Biden $50,000 a month to be on its board – even though Hunter has exactly zero expertise in the energy industry.

When asked about this in September 2019 by a Fox News reporter, Joe Biden said:

He then rather angrily tried to turn the question back on Donald Trump:

I know Trump deserves to be investigated. He is violating every basic norm of a president. You should be asking him the question. Why is he on the phone with a foreign leader? Trying to intimidate a foreign leader?”

Assuming that the emails found on what is believed to be Hunter Biden’s abandoned laptop are legitimate – and it’s rather easy to validate them – Biden’s denial is pure hogwash. Biden could not have not known that Hunter was making big bucks selling access to his dad’s vice-presidential office.

It’s corruption of staggering magnitude at the very highest levels. As Joe himself once said, “This is a big effin’ deal.”

But there’s a story wrapped inside this story and it, too, is a big effin’ deal. Two weeks before a hotly contested election, the legacy media and social media – the two having joined forces to become the Ministry of Truth for the Democratic Party – are contorting themselves to quash all of this.

At this writing, not a word of the Hunter Biden email story has been spoken on any of the Big Three legacy networks. Not a molecule of ink has been expended in the New York Times or the Washington Post. If you don’t watch Fox News or listen to KTBB, you know nothing of this story.

But worse, Facebook and Twitter are actively blocking any sharing of the New York Post article that broke the story. That includes the Twitter account of White House press secretary Kayleigh MacEnany. When she tried to Tweet the Post’s story, she got a message saying that she is permanently banned from the platform.

Do me a favor and close your eyes for a minute. Close them tight and clear your mind. Then, try to imagine what would be happening in the media – picture the media’s white-hot incandescence that would be detectable by instruments on Mars – if the shoe were on the other political foot.