Biden has every reason to cooperate in dealing with Trump’s concerns. 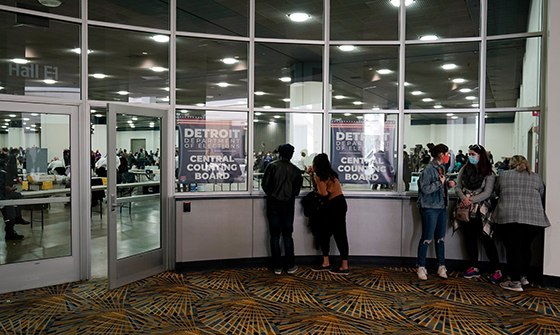 Do you remember four years ago when Democrats accepted that Donald Trump won the election and joined with Republicans in a call for the nation to “come together as Americans?”

Twenty years ago, in the contest between Vice President Al Gore and George W. Bush, do you remember when Florida – and thus the election – was initially called for Dubya by the thinnest of margins? Remember how the Democrats said that even though it was close, it was nevertheless time for the country to accept the fact that the voters had spoken?

Funny, I have no recollection of that either.

Here’s what I do remember. When Al Gore challenged the outcome in Florida, the country – and the Bush campaign – gave him 37 days to make his case. During that time, Gore didn’t give an inch until the issues he raised were finally decided by the Supreme Court.

Donald Trump – at this moment following Election Day and the “projections” of the media notwithstanding – shouldn’t give an inch either. (And just for the record, news organizations don’t “call” the race for president. Please see Article II, Section 1 along with amendment number 12 of the U.S. Constitution.)

There are good reasons for Donald Trump to raise objections to the outcome of this election. We don’t have time to examine all of them but here are some highlights.

This election comes down to about 120,000 votes out of over 150 million cast. That comes to eight tenths of one percent. Those votes are concentrated in just five states: Nevada, Michigan, Georgia, Wisconsin and Pennsylvania. All five states were, prior to the election, labeled as “swing” states.

Using the COVID pandemic as the reason or the excuse – depending on one’s perspective – these states hurriedly adopted mail-in voting. They did so without having had the time to develop mechanisms and systems to mitigate fraud – which even the New York Times acknowledged is much more likely with mail-in ballots.

On Election Night, as the returns were looking favorable for Trump, the counting of votes was abruptly stopped in all five states. When counting resumed, it suddenly favored Joe Biden by huge margins – as much as 98 percent or better.

In Philadelphia, Republican watchers were kept at a sufficient distance from those doing the counting as to make it impossible to actually observe the ballots. The Republican Party obtained an emergency court order to stop this practice. The Philadelphia County attorney went full bureaucrat, promising to “review” the order. But the watchers’ access was never improved.

In that vein, at one point in the wee, small hours of the morning in Michigan, Joe Biden’s vote total advanced by 138,000 votes with ZERO change to Trump’s total. (That’s not statistically impossible. It’s just flat out impossible.)

There are other examples but space doesn’t permit.

Here’s the bottom line. I will be the first to say that it is unlikely that examination by the courts of the concerns raised by the Trump campaign will change the outcome of this election. But such an examination should happen anyway.

COVID, and the resulting hastily arranged mail-in voting procedures in states that everyone knew were going to be pivotal, introduced new dynamics into this election. Among those dynamics was the presence of ample opportunities for fraud. In the election’s aftermath, there is significant anecdotal evidence that fraud occurred.

All of the allegations of mishandling of votes, miscounting of votes and outright fraud should be thoroughly investigated. If we are to trust elections in the future, these concerns must be fully put to rest.

For his part, if Joe Biden truly wants to be, as he put it in his “victory” speech, “…a president who seeks not to divide but unify,” he should willingly cooperate. For if there truly was no wrongdoing – as Democrats insist there wasn’t – cooperating provides Biden with much to gain and little to lose.