The Texas suit is a very big deal. 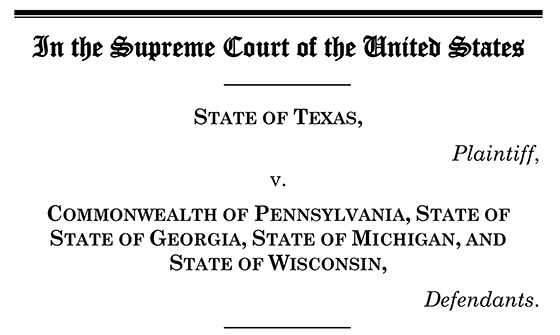 There has yet been no satisfying outcome to the November 3 presidential election. And by ‘satisfying,’ we’re not talking about being happy as to who won and who lost. By ‘satisfying’ we mean having an outcome upon which both winners and losers can agree. Such satisfaction has been the hallmark of U.S. elections for most of its 231 years as a constitutional republic. Win or lose, American voters for the most part have always been able to rely on the results of our elections.

Such is not the case today. Assuming that Joe Biden hangs on to take the oath of office on January 20, he will do so with something approaching half the country believing that his ascendancy to the office is illegitimate. That does not bode well for his administration. It bodes less well for the future of the republic.

With that in mind, Texas Attorney General Ken Paxton has filed suit in the U.S. Supreme Court against the Commonwealth of Pennsylvania and against the states of Georgia, Wisconsin and Michigan. Democrats and the media have been quick to characterize the suit as a “Hail Mary” attempt to keep Donald Trump in office for a second term.

Nothing in the suit says that and in any event, it’s not about Donald Trump – something that attorneys general in 18 other states have apparently recognized as evidenced by the fact that they have joined the suit.

From a constitutional perspective, the Texas suit is a very big deal. Summarizing the suit takes more space than we have but let’s try to sort it out.

The case relies mostly on Article II, Section 1, Clause 2 of the Constitution – commonly referred to as the “Electors Clause.” That clause says:

[e]ach state shall appoint, in such manner as the Legislature thereof may direct, a number of electors, equal to the whole number of Senators and Representatives to which the State may be entitled in the Congress.”

The words, “as the Legislature thereof may direct” are key. The suit filed by Texas boils down to the objectively provable assertion that each of the four defendant states violated the election laws passed by their own legislatures. The complaint asserts that non-elected government officials, using the COVID pandemic as the justification, unconstitutionally waived or modified election laws that were duly enacted via state legislatures for the specific purpose of ensuring the integrity of each state’s electoral process. The suit says that such unconstitutional changes:

opened the door to election irregularities in various forms.”[snip] By waiving, lowering, and otherwise failing to follow the state statutory requirements for signature validation and other processes for ballot security, the entire body of such ballots is now constitutionally suspect and may not be legitimately used to determine allocation of the Defendant States’ presidential electors.”

Mail-in ballots are at the core of the problem. The hastily adopted changes to mail-in balloting procedures combined with, as the Texas suit says:

The suit then goes on to enumerate in great detail the ways in which voting integrity was compromised and highly suspicious activity took place in each of the four defendant states. It further says that the number of suspect ballots in each of the four states exceeds the margin of difference between Joe Biden and Donald Trump in those states – making it impossible to rely on the electoral results. If those unreliable results are used to choose electors to the Electoral College, doing so has the effect of nullifying the electoral votes from states who properly followed the Constitution.

Suits contesting the election filed by the president’s legal team have so far been largely swatted down. But it is unlikely that the Supreme Court will breezily dismiss a suit that is joined by more than a third of the states. The very validity of the Constitution is on the table.

That makes this suit a really big deal…so much bigger than the momentary contest between Joe Biden and Donald Trump.