Who will rescue America from the rescue plan? 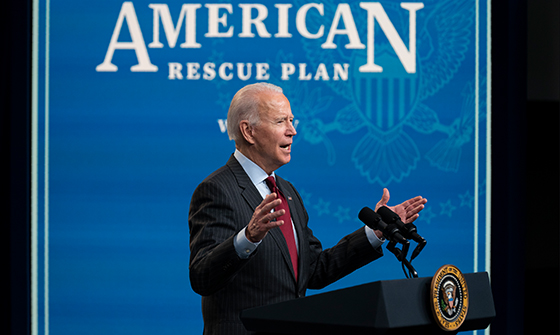 Listen to You Tell Me Texas: Who will rescue America from the rescue plan?

When I was a kid, I talked of being an astronaut. In an effort to focus my energies in school, my mother told me that if I wanted to be an astronaut, I needed to be good at math.

No such admonishment would have been necessary had I said that I wanted to become a member of Congress. Lawmakers don’t do math. Here’s what they do instead.

They spend time jiggering with and debating a $1.9 trillion spending bill called “The American Rescue Plan.” $1.9 trillion. It’s a number so staggering you really can’t process it. It’s a one, a nine and 11 zeros.

Republicans are pushing back on this monstrosity and President Biden is pushing back against the pushback. Earlier this week he said,

We need Congress to pass my American Rescue Plan. It deals with the immediate crisis facing our small businesses. Now critics say the plan is too big. Let me ask them a rhetorical question. What would you have me cut?”

Well, I don’t know, Mr. President, let’s dig around in the bill and see if we can find something.

If the bill truly is about dealing with the “immediate crisis facing our small businesses,” and “rescuing” Americans, how about we line out the $20 billion for the postal service? Or maybe everyone would still be helped even without the $300 million for the National Endowment for the Arts.

How about the $30 billion for the Department of Education stabilization fund – whatever that is?

Those small businesses, and the millions of other Americans hard hit by the COVID pandemic, will probably be OK if you strike through the $300 million for National Public Radio.

The bill calls for $25 million for cleaning supplies for the Capitol building. Question, just how long has it been since the building was cleaned?

If we’re looking for things to cut, maybe we could line out the $95 million for the Agency for International Development. (Show of hands, who has heard of this agency? Anyone?)

Perhaps, Mr. President, we could hold off a while on the $3 billion upgrade to the IT department at the VA. The same for the proposed $7.5 million in additional salaries at the Smithsonian.

With respect to salaries, in light of the fact that millions of small business owners have taken a pay cut, maybe we could forego the $25 million to give members of Congress a pay raise.

And perhaps we can eliminate the 30+ other line items in this monstrosity that have exactly nothing to do with helping either ordinary Americans or small businesses.

Two things about this bill jump out. One, for a country nearly $30 trillion in debt it is cosmically irresponsible. And two, bills like this are now par for the course.