DeSantis got it right. 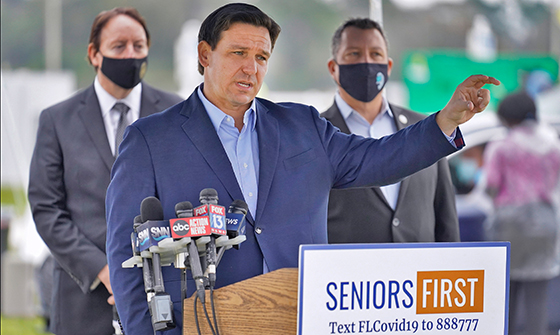 Last year, as the shock of shutting down the American economy in response to the coronavirus pandemic was setting in, and the enormous implications of that unprecedented action were first being considered, I wrote in this space the following:

Appropriate policy occupies some hard-to-determine spot on a continuum between extremes of taking no special action whatsoever, or shutting down all industry, commerce and interpersonal transactions. Business as usual on the one hand, total stop on the other.”

A week later, I posed this question:

One such policymaker did so imagine. It was Florida governor Ron DeSantis. In September, as the “two-weeks-to-flatten-the-curve” shutdown was stretching into week 28, DeSantis stood up to the fear of political decapitation and became the first governor in the nation to start opening his state back up.

In a move that was scathingly criticized, DeSantis reopened restaurants at full capacity and stripped local jurisdictions of the authority to issue fines for not wearing a mask.

The Twitterverse exploded. The talking heads on the lefty cable shows were aghast. “DeSantis has made a ‘grand bargain’ with death,” shrieked the editorial page of USA Today.

None of those hurling invective at DeSantis ever took the time to point out that unlike his counterparts in New York, Michigan and other states, DeSantis was taking a very calibrated approach. He actually did follow the science. He avoided the appalling death toll that New York experienced as a result of Gov. Andrew Cuomo’s decision to shove COVID-positive patients into nursing homes. His Seniors First vaccine rollout into retail stores serves an example for the rest of the country.

The criticism leveled at DeSantis was driven by emotion and hyper-partisan politics. There was no data.

And according to that data, DeSantis’s ‘grand bargain’ turned out rather well. Florida did better in every measure of per capita illness, hospitalization and mortality than California, New York and New Jersey; all three of which remain largely locked down. Especially California.

California’s unemployment rate today stands at 9.3 percent compared to just 5.1 percent in Florida. Kids in California still aren’t back in school. Florida school kids went back at the start of the semester last fall. The Florida economy is booming and people are coming. California is in the doldrums and people are leaving.

Nobody got it completely right on COVID. But Ron DeSantis, a Republican whose place on that policy continuum invited incoming fire, came closer to getting it right than any governor in the country. If, as they say, good policy is good politics, DeSantis’s political future looks very bright indeed.