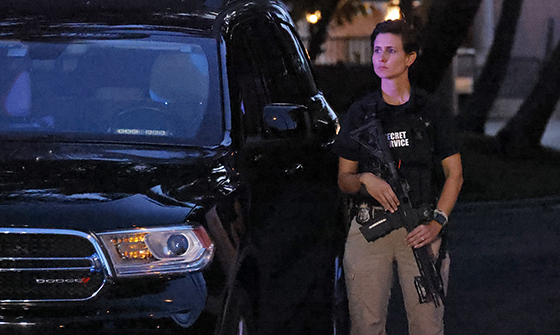 An armed Secret Service agent stands outside an entrance to former President Donald Trump’s Mar-a-Lago estate, Monday, Aug. 8, 2022, in Palm Beach, Fla. Trump said in a lengthy statement that the FBI was conducting a search of his Mar-a-Lago estate and asserted that agents had broken open a safe. (AP Photo/Terry Renna)

We learned last night that the FBI raided the home of former President Donald Trump at Mar-A-Lago in Palm Beach, Florida yesterday. We’re led to believe that they were searching for improperly held classified documents. We don’t know if they found any.

We don’t know if the raid is the product of, or is at the behest of, a grand jury proceeding.

What we don’t know would fill volumes.

But here’s what we do know.

This is without precedent in American history. No former president’s home has ever been raided by the nation’s top federal law enforcement agency. Unless they have something really, really big on Donald Trump, something clearly and unequivocally criminal, the Justice Department is playing with fire.

The first reaction from Trump’s enemies is going to be glee. The alphabet media will make little, if any, effort to conceal their delight. MSNBC has already gone incandescent. The ladies of The View will orgasm today on national TV.

The first reaction from Trump’s supporters will be white hot anger. Those who voted for Trump are already mightily hacked off that a clearly indictable Hillary Clinton skated on malfeasance that would surely have landed someone in her position – but with an “R” instead of a “D” behind his or her name – in prison. They’re hacked off that no one has suffered any significant consequences for perpetrating a totally bogus three-year special counsel investigation of a sitting president based on a piece of Clinton campaign oppo research that was falsely sworn to as probable cause for a FISA wiretap warrant.

Because otherwise the United States – the Shining City on the Hill – will have become a banana republic.

In the absence of something that represents clear and unmistakable wrongdoing by Donald Trump, what the half of the country who voted for him will see is a Department of Justice that has been politicized beyond any hope of redemption.

In the absence of something truly compelling against Trump, what half the country will see is a Washington Swamp establishment mobilized against that which the Swamp fears most: a Trump 2.0 presidency.

What the nation will also see is that the Swamp has nothing but contempt for the American voter (a.k.a we “deplorables”). What we will see is the Swamp’s naked attempt to substitute its judgement for that of the American people. The Establishment Left is forever going on about “threats to democracy.” The truth is, the Establishment Left wants nothing to do with democracy. They want unchallenged power. If they truly believed in the democratic process, they’d trust the voters. That’s the last thing they’re going to do.

Unless there is something really, really big that comes from this raid of Trump’s home, the Establishment Left will have made their true nature and their true intention unmistakably clear. And their true intention is that Donald Trump never finish what he started, which was the expurgation of the liberal coastal elites that have for decades been amassing power and getting rich, all while the American middle class has year after year for more than three decades, been getting poorer.

At this writing, in the absence of hard information, one has only one’s gut to go by. My gut tells me that this is a Hail Mary by the Democrat-dominated DOJ to kill off Donald Trump. If that turns out to be the case, and this effort turns out to be an attempt to juice up a dispute over some documents, I think it likely that this episode will all but assure Trump’s return to the White House.

But please hear this in the way it is intended. I will be relieved if I am wrong. If the raid of Donald Trump’s home brings to light evidence of criminality or wrongdoing that would disqualify him for office, if Donald Trump is legitimately indicted for a serious crime [emphasis added because an illegitimate indictment is an entirely plausible scenario], I will count it as a blessing.

Because unless that happens, unless the DOJ turns out to have acted properly in taking such a colossal step, the damage to the DOJ, the FBI – and indeed the entirety of America’s institutions as embodied in Washington, D.C. – will be devastating and, very possibly, irreversible.