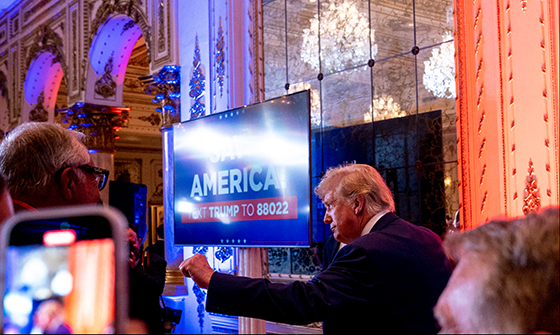 This isn’t how it’s supposed to work. Everybody knows that the party out of power in a president’s first midterm election gains seats. We think of it as a given. Layer on top of that a president with historically dismal approval ratings, an economy that’s headed south, crushing inflation, rising interest rates, crumbling 401(k)s, rampant crime, millions of unvetted, uneducated and minimally employable illegal migrants flooding the country, an epidemic of death brought about by the Fentanyl that’s flooding in with them, an entire generation of school-aged children behind the academic eight-ball because of ill-advised COVID policies, and a rising tide of threat from adversaries like China and North Korea – take all of that and pile it on top of the history of first presidential term midterm elections – and the Republicans should have had a blowout Tuesday.

What next centers on Donald Trump. It’s safe to say that he thought he’d be riding a wave of euphoria over the GOP’s performance in the midterms. I think he thought an inevitable win by Dr. Oz in Pennsylvania would burnish his creds for a second presidential run. Dr. Oz lost to a guy who literally can’t form a coherent English sentence. That doesn’t help Trump.

I appreciate Donald Trump. We conservatives will always be in his debt. If Donald Trump hadn’t come along when he did, we would have had to invent him.

We’ve been led for decades by a small, inbred group of elitist Ivy Leaguers and they have made a pig’s breakfast of it. By this time in its history the United States should be substantially debt free, economically strong and well-capable of deterring the world’s bad actors.

Racial animus in America should be on the wane.

Prosperity should be making its way through every demographic group in the country. Today’s generation of black and Hispanic parents should be approaching their old age secure in the knowledge that their children will be better off than they were.

Today, none of those things is true.

Trump’s arrival caused the scales to fall from the eyes of people like you and me who once were excited about a guy like Mitt Romney. (How the hell were we ever excited about Mitt Romney?) Trump brought long overdue clarity. We owe him for that.

One Republican had a great night Tuesday. His name is Ron DeSantis. A stellar record as governor of Florida – driven in large measure by his steadfast refusal to allow the pandemic to take away the rights and liberties of his people – propelled him to the kind of lopsided victory in Florida that we were all hoping would play nationally.

There was a red wave in Florida. DeSantis won Tuesday night by more than a million and a half votes. He crushed former Republican and former Florida governor Charlie Crist.

Yet last Saturday Donald Trump gratuitously and with exactly zero provocation referred to DeSantis as “Ron DeSanctimonious.” Why?

Can he truly not help himself? And in light of Republican election night disappointment, can we still afford him?