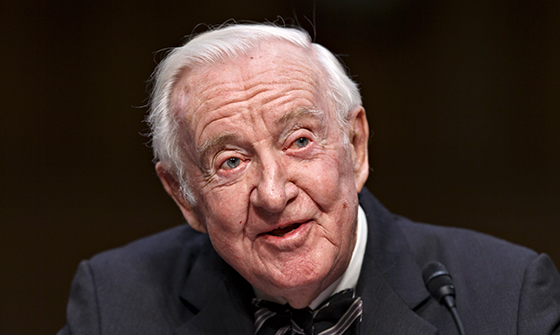 I am not a gun owner. Or at least, I don’t own a gun that has any chance of being fired. My great grandfather’s .45 caliber service revolver from his days as sheriff of Delta County, Texas passed down the inheritance chain to me. That pistol hasn’t fired a round in close to a hundred years. So there’s no personal passion in this piece.

Former Supreme Court Justice John Paul Stevens, now 97 years old, opined in the New York Times that the kids demonstrating in Washington in the wake of the Parkland, Florida school shooting should, “seek more effective and lasting reform.” They should, he said, “demand a repeal of the Second Amendment.” He goes on to say that the Second Amendment is an 18th century anachronism, no longer necessary in the 21st century.

How a man who came of age and began practicing law immediately after World War II could say such a thing is beyond comprehension. Ownership of a firearm was a capital offense in the German occupied countries of Europe. As a result, at least 10 million of the estimated 60 million who died during World War II died directly as a result of being utterly incapable of defending themselves.

That fear of such tyranny in the United States seems plausibly dismissible is precisely because of the Second Amendment. The same is true regarding the potential for foreign invasion. Here in America, tyrants and foreign invaders have been held in check for 229 years in large measure because of the certain knowledge that We the People can defend ourselves. It is Japanese admiral Isoroku Yamamoto who is quoted as saying,

…to invade the United States would prove most difficult because behind every blade of grass is an American with a rifle.”

Keeping tyrants and invaders at bay is only one argument for America’s Second Amendment. Personal responsibility is another.

The hard — but under-appreciated — truth is that the government cannot protect you. When a bad guy threatens, the police cannot possibly get there in time. A corollary to that truth is the fact that the police don’t carry guns to protect you in the first place. They carry guns to protect themselves. In almost every police-involved shooting that you ever hear about, the officer fired his weapon in defense of his own life.

Hysteria aside, the core truth is America doesn’t have a gun problem. We have a violence problem. Repealing the Second Amendment would only make that problem worse. To repeal the Second Amendment would be to turn free, law-abiding citizens into caged animals – caught between fear of a tyrannical, gun-possessing government on one side and predatory, gun-possessing criminals on the other.

You would think that Mr. Justice Stevens has seen enough in his 97 years to know this.