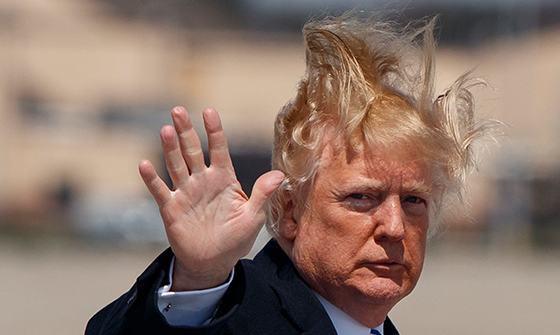 There is a scene in the movie “Raiders of the Lost Ark” in which Indiana Jones, played by Harrison Ford, is confronted by a bad guy with a really large sword. The bad guy laughs menacingly while threatening Indiana and making a big show of brandishing the sword.

Indiana takes this all in for a moment before reaching for his revolver, rolling his eyes and simply shooting the guy. Problem solved.

The scene worked as a moment of comic relief and the comedy lay in what was expected of Indiana.

The audience expected Indiana to either engage the sword-wielding bad buy on the bad guy’s terms or high-tail it out there. Indy had no time for either. He ignored custom and just casually shot the guy. It was a direct response to a direct problem.

Donald Trump’s presidency has, in many ways, been like that scene in Raiders. Time and again, when dealing with problems that have festered for years under previous administrations, Mr. Trump has simply rolled his eyes, reached for his metaphorical pistol and fired. But unlike the scene in Raiders, where the audience laughed, no one is laughing at Trump. And his detractors – including an almost universally hostile media – are openly aghast.

But to what effect is President Trump shooting from the hip? Let’s go down the list.

Where previous administrations have tried bribing and appeasing a threatening North Korean dictator, which is what has come to be expected of American administrations, Donald Trump beefed up American naval presence in Asia while offering the Kim Jong-un the prospect of complete annihilation if he chooses not to behave. The dictator now says he wants to talk.

Where previous administrations have put up with European countries stiffing their financial commitments to NATO, Donald Trump said loud and clear, ‘pay up.’ Twenty five NATO countries shortly thereafter announced plans to up their defense spending.

Where previous presidents have mouthed meaningless words about Mexico exporting its poverty to the United States, Donald Trump mobilized the National Guard to help protect the border. The flow of illegal immigrants has slowed dramatically while a growing list of cities and counties in California are now actively resisting that state’s “sanctuary” law.

Where previous administrations allowed China to cheat on trade for decades and allowed China to close markets to U.S. manufacturers and rip off intellectual property and trade secrets, Donald Trump rolled his eyes and imposed tariffs. Little reported by the anti-Trump media is that behind their public bluster, Chinese officials are quietly negotiating with the Trump administration.

Often inelegantly and almost always braggadociosly Donald Trump is getting things done. Like Indiana Jones, Donald Trump is often disinclined to observe the traditional niceties. This rankles in many quarters, most especially in establishment Washington.

But, also like Indiana Jones, Donald Trump is getting results. And despite overwhelmingly negative press coverage, his approval rating according to Rasmussen now stands above 50 percent.

Getting things done can have that effect.