Refusing to speak the truth. 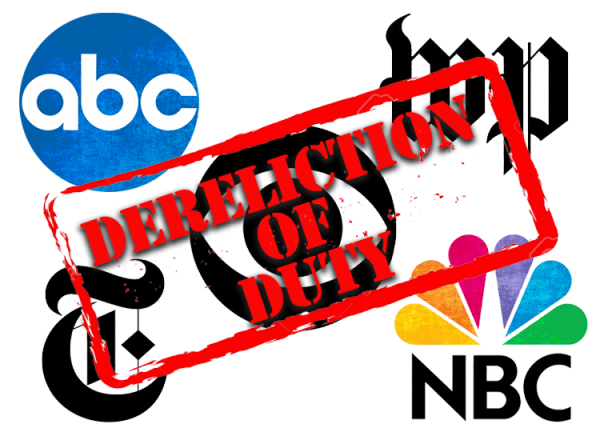 I can’t find it, but I recently saw a comparison graphic that purported to illustrate the political divide bedeviling our country. As I recall, it illustrated polling comparisons between 2010 and 2020 (or some similar period), and it showed that where the political left and the political right in America once shared common ground on about 35 percent of core beliefs, that number is now down to the mid-teens.

According to this graphic, we’re losing the middle ground that has always held us together.

That bodes ill. And to a very large extent, I blame the media.

The people on the two political extremes that have always been there notwithstanding, I continue to believe that most Americans are reasonable and will come to the right conclusion and do the right thing when properly informed. I also believe that the biggest problem with corporate media is not what they report and get wrong, it’s what they choose not to report at all. You may quote me on this:

Examples abound. If the legacy media had not ignored the story of Hunter Biden’s abandoned laptop, the high-level corruption that it revealed  would have been taken into account last November when voters went to the polls.

If the media would actually dive into the story of the human catastrophe  that is playing out day-by-day on our southern border, the American people would very likely be loudly demanding that the chaos be brought under control.

If the legacy media had properly covered the Russia collusion story, and if they had properly informed the American people that James Brennan and James Comey and Peter Strzok and all the others committed egregious violations of law for partisan purposes, those individuals would have by now been brought to justice. That such hasn’t happened only emboldens future bad actors at the highest levels of government.

The weight of the evidence now tells us that the Chinese government bears direct responsibility for the coronavirus pandemic that has sickened and killed millions while crushing the world economy. A properly informed American electorate would now be insisting that our government hold China to account. But, unless you listen to talk radio or watch the primetime schedule on the FOX News Channel, your understanding of the Chinese government’s culpability in a global disaster is very limited. The media is consciously choosing to downplay what should be the story of the Millennium.

I could go on with example after example but space doesn’t permit. The bottom line is that I believe that the shrinking of the middle in that graphic of which I spoke earlier is in direct proportion to the degree to which the legacy media is making the conscious – and highly lamentable – decision to be derelict in its duty.