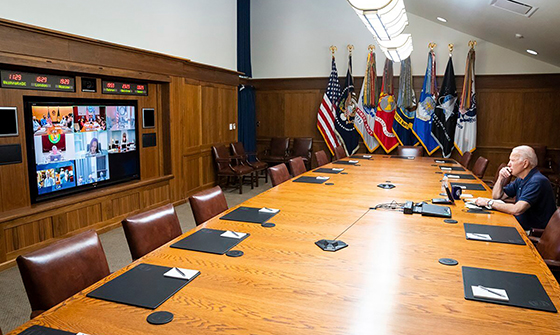 In this photo released by The White House, President Joe Biden meets virtually with his national security team and senior officials for a briefing on Afghanistan, Sunday, Aug. 15, 2021, at Camp David, Md. (The White House via AP)

We still live in the greatest country in the world.

Yes, our problems, if not addressed, admittedly have the potential to ruin us. But our problems can be addressed.

I admit that it is hard as a proud American to watch the unfolding disaster in Afghanistan. That tens of thousands of American citizens remain behind enemy lines with no plan by the government to get them out runs against everything any patriotic American wants to believe about his country. The fact that the fate of our fellow citizens will be dictated to us by a bunch of terrorist thugs is humiliating. We’re the greatest power in the world and yet, because of the breathtaking fecklessness of the Biden administration, rather than us shaping events, events are shaping us.

But we shouldn’t be surprised. Prior to Afghanistan dominating the headlines another catastrophe was playing out day by day and continues to do so. If President Biden – who at the moment just can’t wait to get to Camp David – had simply gone there the morning of January 21 of this year and stayed, the southern border would still be under control and we wouldn’t have tens of thousands of poor, illiterate, unskilled peasants piling up at our border before pouring into our country. That’s because President Donald Trump had the border under control. Now it’s a disaster.

So, too, with gasoline prices. After President Biden undid most of Donald Trump’s energy policy, our hard-won energy independence has now slipped from our grasp. We’re now treated to the sight of Joe Biden begging the petrotyrants of OPEC to ramp up production in the hope that it will help lower gasoline prices.

The bungling incompetence of the Biden administration is breathtaking. The fact that his far leftwing base seems to be calling the shots is maddening. The thought of the long-term implications of all of this can be disheartening.

But don’t be disheartened.

If we’ve learned nothing, we’ve learned that who we elect as president really matters. Even supporters of Donald Trump were astonished at how quickly a moribund economy was made to soar, how quickly our adversaries lowered the temperature, how quickly stagnant wages began to grow and how quickly pessimism about the future turned to optimism.

Don’t let the appropriate fear and outrage blind you to the fact that we still live in the greatest country in the world.

The United States is a vast country filled with millions and millions of good people. We will turn this around.

We’ve done it before.