Let them eat cake (through their masks). 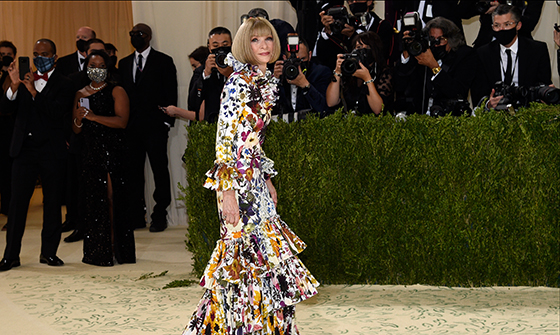 Anna Wintour attends The Metropolitan Museum of Art’s Costume Institute benefit gala celebrating the opening of the “In America: A Lexicon of Fashion” exhibition on Monday, Sept. 13, 2021, in New York. (Photo by Evan Agostini/Invision/AP)

You never have to look hard or wait long to find examples of lefty ‘rules-for-thee-but-not-for-me’ hypocrisy. Examples abound.

California Governor Gavin Newsom survived a recall election this week that was driven in no small measure by his manifest hypocrisy. Last November, after having just told his citizens subjects that they couldn’t have the family over for Thanksgiving – you know, COVID and all – Newsom was photographed at a posh Napa Valley restaurant maskless – along with dozens of maskless guests – at a birthday soirée for a high-profile lefty lobbyist.

We need to stay home if you can, do everything you can to try to keep the numbers [meaning COVID] down. This is not the time to relax.”

It quickly came to light that he posted that video from Cabo San Lucas where he had just flown via private jet to – you guessed it – relax.

RELATED: The word ‘hypocrite’ no longer starts with an “H”

There are many more examples. But for brazen leftist hypocrisy, it’s hard to top the Met Gala in New York. The Met Gala is a charity event that benefits the Metropolitan Museum of Art’s Costume Institute. It’s put on by Vogue Magazine editor-in-chief Anna Wintour. It costs $35,000 a ticket to attend.

The Met Gala is an opulent, Palace at Versailles-like event of gluttonous excess and narcissistic preening that would likely embarrass even Louis XVI. It’s the sort of event for which one is asked, “Who are you wearing?,” as in, “Which famous designer created your grotesquely expensive, ridiculous-looking, tasteless-trying-to-be sexy party frock?” (For my money “Who are you wearing?” is the snottiest, most pretentious question that can be formed using English language words.)

The Met Gala guest list is predominantly liberal, predominantly wealthy and, as can be seen in photos from the event, predominantly white. Which, if it stopped there, would be fine. If rich, pasty white liberals want to throw a party and invite black and Hispanic celebrities, power to them.

New York representative Alexandria Ocasio-Cortez was one such Hispanic. She showed up in a white designer gown upon which had been painted in red, “Tax the Rich.” Now that’s rich.

But look carefully at the photos. The bedecked, bejeweled and mostly white attendees are, to a person, maskless. The faces of the mostly black and brown waiters are all covered. Apparently, if you’re rich, white and liberal you pose no risk of spreading COVID at a party. But if you’re an hourly worker employed in a servile job at that party, safety demands that you wear a mask lest you spread disease and death.

The truth is that all for all of their preening and posturing to the contrary, if you’re black or brown and haven’t quite managed to become a celebrity, rich liberals don’t really give a damn about you. What’s more, that disdain extends to every person in the country who can’t afford $35,000 to go to a party.

Which helps prove the Gleiser Postulate; there is no greater hypocrite in the solar system than a rich, white liberal.