Condi shows the Left for who they really are. 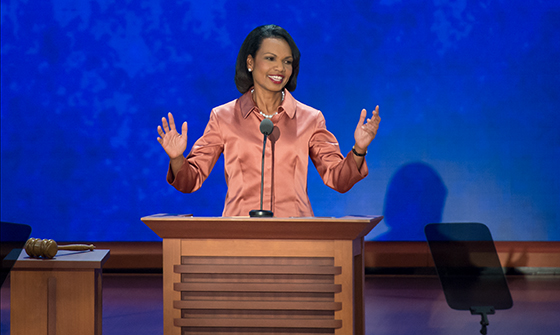 Psychological projection (usually simply called ‘projection’) is a term used to describe the phenomenon of accusing others of the negative behavior in which oneself is actually engaging. Projection is the way that people who are doing bad things find a way to live with themselves. A common example is the cheating husband who accuses his wife of having an affair. Very nearly all of us from time to time, as the stresses of life become hard to manage, engage in mild forms of projection.

But a very malignant form of projection has taken hold in our political discourse. And it comes predominantly from the extreme Left. Examples abound.

Leftists who were steadfastly silent about the riots that killed as many as three dozen people and did billions of dollars of damage – including the destruction of countless minority-owned businesses – in cities from Portland to Seattle to Chicago loudly condemned the January 6 Capitol Hill riot.

I grew up in segregated Birmingham, Alabama. I went to segregated schools until we moved to Denver. My parents never thought I was going to grow up in a world without prejudice, but they also told me that’s somebody else’s problem – not yours. You’re going to overcome it and you’re going to be anything you want to be and that’s the message I think we ought to be sending to kids.”

For that uplifting statement, Ms. Rice was branded as a “solider for white supremacy” by former MSNBC host Taure Neblett. In Neblett’s world, all white people bear guilt for what their great-great grandparents did and  thus all white people are bad and should be scorned for the simple reason that they’re white. By extension, he believes that all black people are forever doomed to victimhood by the inescapable racism of white people.

Condoleeza Rice’s parents believed otherwise. She made that case with extreme eloquence during her keynote address at the 2012 Republican National Convention.

A little girl grows up in Jim Crow Birmingham, the segregated city of the south where her parents can’t take her to a movie theater or a restaurant. But they have her absolutely convinced that even if she can’t have a hamburger at the Woolworth’s lunch counter she could be President of the United States if she wanted to be and she becomes the Secretary of State.”

Condoleeza Rice’s story should be held up as an example to every school-aged child – black, white or brown. Emulation of her example is the surest path to racial harmony in America.

But Neblett is blinded by hatred. Hating someone because of his or her race is the very definition of racism yet that’s exactly what he advocates. Neblett is the type of race hustler we should have long ago outgrown.

And he is the very embodiment of liberal projection.