The media’s disgraceful reporting of the Rittenhouse case. 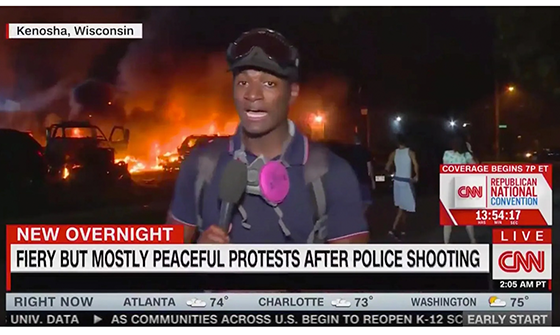 CNN characterizes riots in Kenosha, WI as “mostly peaceful protests” even as fires set by rioters burn in the background.

As this column is being written, a jury in Kenosha, Wisconsin is deliberating the fate of Kyle Rittenhouse. The 18-year-old Rittenhouse faces five felony counts including intentional homicide and if convicted, could go to prison for the rest of his life.

The Rittenhouse case springs from riots in August of 2020 in Kenosha following the police shooting of a black man named Jacob Blake. If you rely on the coverage on most of the so-called “mainstream media” here is what you believe.

First, the shooting of Jacob Blake was the product of the racial animus of a white police officer toward a black suspect. Second, Kenosha, Wisconsin became the site of “mostly peaceful protests” as a result of the unjust nature of that shooting. Third, Kyle Rittenhouse is a white supremacist vigilante. Fourth, he has no connection to Kenosha and he illegally transported an “assault weapon” across state lines. And fifth, the “mostly peaceful” protesters in Kenosha included Black Lives Matter followers and racist Rittenhouse went there looking for a fight.

By making things up from whole cloth or, more insidiously, leaving out important details, the media created its own malignant narrative surrounding the Rittenhouse case.

But as Rittenhouse’s trial unfolded, that narrative fell apart.

Jacob Blake was shot by police because he threatened them with a knife after having similarly threatened his former girlfriend while trying to steal her car. Attempts to subdue Blake via non-lethal means had not been effective. At the time he was shot, Blake was wanted on a warrant for third degree sexual assault.

The “peaceful protests,” that followed the shooting of Blake were in fact riots that burned down dozens of buildings and did $50 million-plus in damage.

There has been exactly zero evidence presented that Rittenhouse has any connection to any white supremacist group. All three of the men he shot were white.

Rittenhouse lives with his mother in Antioch, Illinois, just across the state line 20 miles from Kenosha. Much of Rittenhouse’s family, including his father, lives in Kenosha and Rittenhouse has a job there. His AR-15 rifle stays at the home of a friend and his possession of it is completely legal in Wisconsin.

Rittenhouse was in Kenosha cleaning graffiti off of buildings and on the night of the shooting had been offering first aid to wounded protesters. He did have an AR-15 rifle with him, but rather than provoking violence, he was actually retreating and only fired his weapon when he was threatened with serious bodily harm, including having had a pistol leveled at him. (That bit of information actually came from a prosecution witness.)

All of this has come to light during the trial. The prosecution’s case against Rittenhouse fell apart in plain view as a result of the live TV coverage that the judge in the case permitted.

Yet, the media persists in its narrative that Rittenhouse is a racist murderer. They would let you believe that his victims are black. They’re not. All three are white.

They would let you believe that the “peaceful protests” in Kenosha were justified because of the wrongful actions of a racist white police officer, ignoring that Wisconsin state authorities and the U.S. Department of Justice cleared the officer in question of any wrongdoing.

They would also let you believe that the judge in the Rittenhouse trial, Bruce Schroeder, is a Trump-loving Republican who is doing all he can to tip the case against the prosecution. Schroeder is, in fact, a Democrat who was appointed to the bench by Democratic Wisconsin governor Tony Earl.

(And this just in: Judge Schroeder just banned MSNBC from the courthouse because MSNBC was caught following jurors in an apparent attempt to intimidate them by photographing them so as to publicize their identities.)

The media’s “reporting” of the Rittenhouse case is beyond disgraceful. The jury hasn’t rendered a verdict, but the media did long before the trial even began. The media has now abandoned even the pretense of objectivity and reportorial integrity in favor of advancing their own predetermined and politically driven narrative.

We can thus thank the media for the National Guard troops that are on standby – waiting in case the jury dares to find Kyle Rittenhouse not guilty.