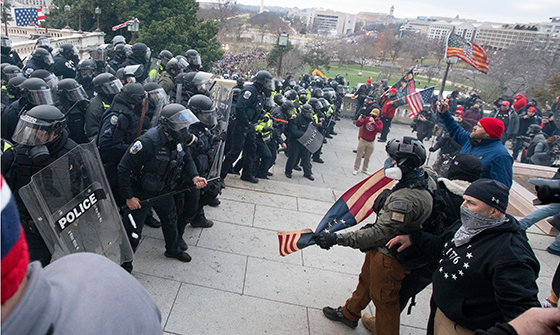 The rioting that broke out on Capitol Hill one year ago today should never have happened. Period. Full stop.

The knuckleheads that engaged in it did harm to the very cause they intended to support. If the goal was to go to Washington, D.C. to attend a rally in support of expressing concern about the integrity of the 2020 election, it was pure lunacy to engage in a riot. By storming the Capitol, these idiots effectively placed a tinfoil hat upon every single one of us who harbors legitimate concern about the way that the 2020 election was carried out in certain Democrat-dominated precincts.

Though Democrats ridicule anyone who dares say so, the COVID pandemic provided them cover to make critical changes to election procedures in in some key states. Those changes – which included hastily implemented mail-in voting, unattended ballot drop boxes and drive-thru voting – dramatically reduced safeguards against fraud. In all cases, those procedure changes were made without the benefit of legislative action and were thus, in all cases, clearly illegal.

Regardless of whether or not there was fraud sufficient to have changed the outcome – and we will never know – it’s quite reasonable to have serious questions about the 2020 election and concerns as to how those questions might affect future elections.

So, with all of that said, let’s consider January 6. First, though Dems try to make it so, January 6 is in no way analogous to September 11. It just isn’t. It was not an “insurrection” as Democrats and the media love to call it. There was no attempt to “overthrow” the government.

Second, Democrat outrage over January 6 would carry more weight if they had shown similar outrage over the riots that happened night after night in cities across the country for nearly the entirety of the summer of 2020. Unlike January 6, those riots had a lasting impact in lives lost, businesses burned out (many of them minority-owned) and police departments demoralized to the point of dysfunction.

Third, Democrats would have more credibility in denouncing the concerns about the 2020 election that sparked the January 6 capitol riot if they, themselves, hadn’t for four years cried foul about the 2016 election. In stark contrast to the questions that linger over places like Fulton County, Georgia and Wayne County, Michigan, there is exactly zero evidence that Donald Trump “colluded” with the Russians to “steal” the 2016 election. There is, however, considerable evidence to suggest that those who are concerned about the integrity of the vote counting in 2020 in certain jurisdictions have a right to those concerns.

What’s really going on is that January 6 is a useful tool for Democrats. It’s useful in their efforts to discredit supporters of Donald Trump. It’s useful in casting doubt in the minds of independent voters who might otherwise be persuaded to vote for a Republican. And of particular timeliness to Democrats in January 2021, January 6, 2020 serves as a much-needed diversion from the spectacle of a rapidly failing Biden presidency.