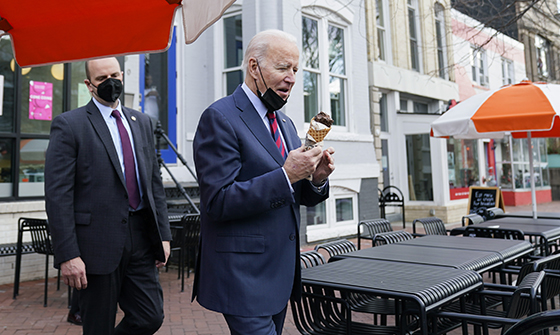 As any White House press corps veteran will attest, covering the president often entails very late lids. But not so much with the Biden White House.

Biden’s press team called a lid at 3:05 Tuesday afternoon – but not until after President Biden had completed an excursion during which he visited a chi-chi boutique and then stopped for an ice cream cone.

A White House reporter – in an apparent random act of journalism – pressed White House press secretary Jen Psaki earlier in the day Tuesday on the fact that the only thing on the president’s schedule that day was the Presidential Daily Briefing – the PDB. This is how Psaki responded:

Uh, well, let’s see. Umm, this morning I think he had some policy meetings, ah, also a PDB meeting. Umm, he, umm, later this afternoon, uh, I think is doing some remarks review, ah, there are some days that we spend some time, ah, doing internal meetings and discussions, uh, with policy experts, with policy leaders, umm, and that’s, that’s what’s happening today.”

Translation: The president doesn’t have a lot going on today.

Psaki stammered and hummed and um’d because she was at an obvious loss to explain the president’s empty schedule on Tuesday. In the end, it consisted of one routine meeting – the Presidential Daily Briefing – and then a trip out for shopping and some ice cream.

This as the occasion of Biden’s presidency continues to pile higher and higher with difficulty. The southern border continues its descent into chaos as illegal migrants pour into the country in sufficient numbers as to add the poor, unskilled and illiterate equivalent of a City of Tyler, Texas to the U.S. population every three weeks. Russia threatens to invade Ukraine as China concurrently threatens to invade Taiwan. Inflation spirals ever upward as shoppers contend with empty store shelves and higher prices. The country’s biggest cities are wracked by the simultaneous scourges of crime and homelessness. Evidence continues to mount that an entire generation of school children are in deep and probably lifelong academic deficit following ill-advised COVID policy as it pertains to schools.

All the while, malevolent geopolitical thugs like Xi Jingping, Vladimir Putin, Kim Jong-un and the theocrats of Iran are all looking at the United States and marveling at their good fortune that a doddering American president is keeping a light schedule, eating ice cream and calling it a day at three.

I know it’s now cliché to say this but indulge me.

Imagine how the media would have reacted if Donald Trump, amid multiple crises on multiple fronts, had packed it in at three o’clock – but only after having gone out for ice cream.

Close your eyes and just imagine.