Reviewing the lessons of Baltimore. 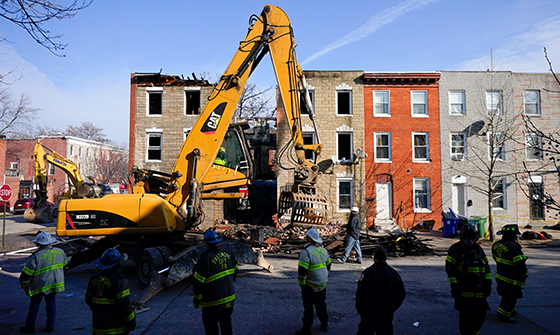 Fire officials and a crew look on as an excavator is used to pull debris off a building during efforts to retrieve the body of a deceased firefighter caught in the building’s collapse while battling a two-alarm fire at the vacant row home, Monday, Jan. 24, 2022, in Baltimore. Officials said several firefighters died during the blaze. (AP Photo/Julio Cortez)

We get the empty sanctimony of removing a statue of Thomas Jefferson from New York City’s City Hall because Thomas Jefferson, like very many of his 18th century contemporaries, owned slaves.

And we get President Joe Biden pontifically announcing that he will only consider nominating a black woman to the U.S. Supreme Court seat being vacated by the retirement of Justice Stephen Breyer.

None of these things – in fact nothing that any elite, pasty white liberal is thinking, saying or doing with respect to race – is in any way improving the lives of black Americans. In support of that assertion, I give you Baltimore.

Baltimore – once vibrant and prosperous – is today one of the worst cities in the Western Hemisphere. It has lost population in every census since 1960 and now has only about half the residents it had when Eisenhower was president.

RELATED: Baltimore: A Monument to Democrats

It is besieged by crime. In the first month of this year, there were 36 murders in Baltimore – more than one per day. The murder rate in Baltimore exceeds that of El Salvador, Guatemala and Honduras. More than 90 percent of perpetrators and victims of murder in Baltimore are black.

The Drug Enforcement Administration estimates that one of every ten Baltimore residents is addicted to heroin. In many parts of the city, life expectancy is lower than that of North Korea.

Fewer than three percent of graduates from Baltimore public high schools can read at grade level. Despite this, every high school student – assuming that he or she doesn’t drop out – receives a diploma.

Nearly one of every four persons in Baltimore lives below the poverty line – a rate 75 percent greater than the country as a whole.

And here is one more statistic on Baltimore. Nearly two thirds of its population is black. The mayor is black. The police commissioner is black. Ten of the fifteen members of the city council are black. (And all of them are Democrats.)

When Biden nominates a black woman to the Supreme Court, liberal talking heads will race one another to get on television to say that with a black female on the high court, black women’s interests “will finally be represented.” That’s a crock. The lives of black women will be no better represented in 2022 following the appointment of a black woman to the Supreme Court than the lives of black men were better represented in 2008 by the election of a black man to the presidency.

Baltimore is a microcosm of urban America and the simple fact is, if black citizens want to have a better life, they, like everyone else, will have to create it for themselves. The near religious belief among urban black voters that electing Democrats will improve their lives is the number one reason that their lives haven’t improved at all.

So long as skin color is the primary consideration for advancement – rather than no consideration at all – nothing will get better.

No matter what elite, white liberals say, until urban black citizens insist that criminals be punished, insist that their children be able to read at grade level, avoid illicit drug use and resolve to take responsibility for bettering their own lives rather than wait for Democrats to do it for them; instead of improving, life for black people in America will only get worse.