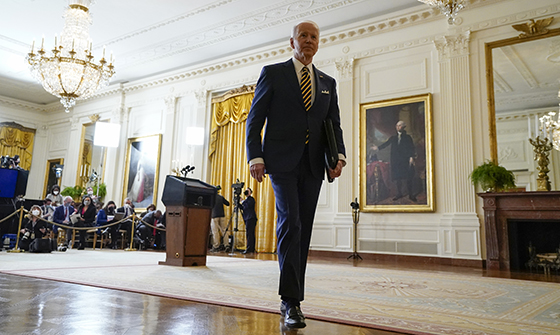 President Joe Biden leaves after a news conference in the East Room of the White House in Washington, Wednesday, Jan. 19, 2022. (AP Photo/Susan Walsh)

As the story from the 2020 presidential campaign goes, former President Barack Obama said of Joe Biden, “Never underestimate Joe’s ability to foul things up.” (Only he didn’t say, “foul.”)

As we mark the one-year anniversary of President Biden’s inauguration, I confess that I, myself, am guilty of having underestimated Biden’s abilities to foul things up. I predicted this time last year that this was going to be a bad administration. But I didn’t think it would be this bad.

This time last year, distressed as I was over the prospect of a Biden presidency, I nevertheless tried to take comfort in my belief that Biden would do what politicians do, which is to say, act first and always in his own self-interest. Would that he had done so.

Instead, Biden went on a far-left tear. For his trouble, he has been rewarded with catastrophic poll numbers from which he will likely never recover.

It needn’t have been so.

For starters, he could have left Donald Trump’s immigration policy in place. He could have let construction of the border wall continue and blamed its existence and the government’s commitment to finish building it on Orange Man. He could have continued the ‘remain in Mexico’ policy and blamed that on Trump as well. Of course, his far-left base would have yipped and yapped and howled. But the far left, being impossible to ever fully please, will always yip and yap and howl. If Biden had simply resolved to endure the yapping, the far-left would still be stuck with him but he would have retained the support of moderate Democrats and independents – support that he’ll likely never regain.

He could have similarly treated the Keystone XL pipeline and the rest of the Trump energy policy as fait accompli and taken credit for low energy prices. Instead, he is being blamed for high gasoline and home heating oil prices – both contributing to a severe spike in inflation for which he is also being blamed.

He could have taken the Trump plan for withdrawing from Afghanistan, relabeled it as his own, and today be basking in praise for having ended America’s longest war. Instead, he failed to follow Trump’s withdrawal blueprint and failed to heed the advice of his senior military advisors. Those failures cost an unknown (and probably unknowable) number of innocent lives while turning an indeterminate number of American personnel into de facto hostages. Afghanistan stands now as the most humiliating chapter in U.S. military history.

Biden’s rhetoric of the past year could have followed through on his Inauguration Day promise to unite the country. He has instead repeatedly used the presidential lectern to characterize anyone who disagrees with anything he says as a latter-day reincarnation of Bull Connor.

These failures and more have caused Biden to suffer the worst first-year presidential polling collapse in living memory. He has fouled things up, indeed.

For all of this, however, there is a bit of bipartisan silver lining.

Barack Obama and I finally agree on something.