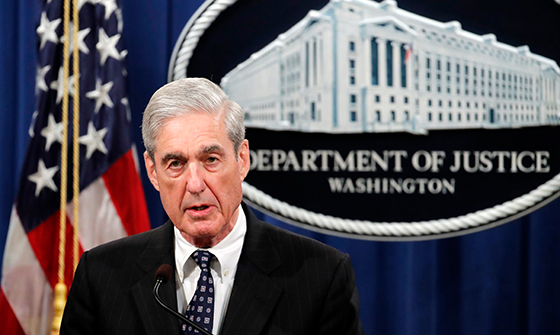 Alan Dershowitz is a law professor at Harvard Law School and a self-proclaimed liberal Democrat. He is also intellectually honest. In an op-ed Thursday, reacting to special counsel Robert Mueller’s statements at a press conference Wednesday, professor Dershowitz said:

Until today, I have defended Mueller against the accusations that he is a partisan. I did not believe that he personally favored either the Democrats or the Republicans, or had a point of view on whether President Trump should be impeached. But I have now changed my mind. By putting his thumb, indeed his elbow, on the scale of justice in favor of impeachment based on obstruction of justice, Mueller has revealed his partisan bias. He also has distorted the critical role of a prosecutor in our justice system.”

What we are coming to understand is that Robert Mueller knew within the first weeks following his appointment that the nominal predicate for his investigation – namely a conspiracy between the Trump campaign and the Russian government to steal the election from Hillary Clinton – was without merit. Yet, Mueller nevertheless spent close to two years and upwards of $40 million in a best-efforts attempt to nullify the 2016 presidential election.

For the republic to survive, we must always remember that the justice system is not the mechanism for settling political and policy differences. Such differences are to be settled at the ballot box.

However, it is clear that most top-level Democrats and most top-level members of the media believe in the sanctity of the ballot box only when the vote goes their way. From the very moment that it started becoming clear that Donald Trump was going to win the election, Democrats have been looking for a way to either overturn or delegitimize that victory. They have been looking for ways to thwart the stated will of the majority of voters in a majority of the counties in a majority of the states in the union.

Taken to its logical conclusion, the outrage of Democrats isn’t directed at Donald Trump. It is directed at the 63 million American citizens who voted for him.

A sober, mature and patriotic American political party wouldn’t be acting this way. Democrats of a generation ago would do what losing parties on both sides have always done. They would look carefully at why they lost and re-tool their message and policy positions accordingly – with an eye toward winning the next election.

Professor Dershowitz on Thursday reached a conclusion that many of us reached long ago. The Mueller investigation was never about pursuit of the truth. It was about political revenge. Robert Mueller’s gratuitous suggestion Thursday that Donald Trump might be guilty of something he just doesn’t know what was given purely for the purpose of keeping talk of impeachment alive. It was entirely improper.

Between Mueller’s naked partisanship and the Democrats’ relentless attempts to overturn a duly-constituted election, the country has set itself down a very a dangerous road. We must reverse course before it’s too late.