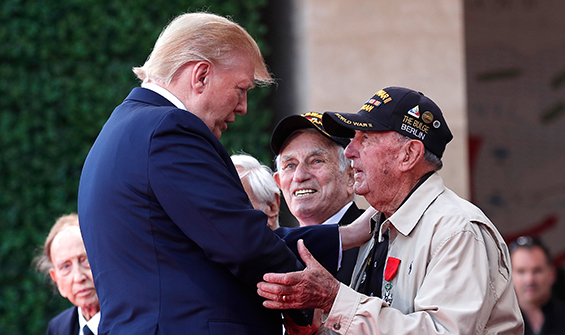 The key is to “let Trump be Trump.” Such has been the mantra from his campaign to his presidency. The tweets, the mocking nick names, the brash statements – all of it. We have to let Trump be Trump, they say. And so far, cringeworthy moments aplenty notwithstanding, Trump being Trump has, by and large, worked.

Yet, Donald Trump continues to be arguably the most polarizing president in U.S. history. His political opponents don’t merely dislike his policies. They dislike him – Donald Trump the human being.

Given the robust health of the U.S. economy and the feeling abroad in the land that things are generally going well, Donald Trump’s approval numbers should be in the high 60s or better. Instead, he does well to break a 45 in most polls. The intemperate outbursts and the aforementioned cringeworthy moments are certainly largely to blame.

Nevertheless, Donald Trump is who he is and it cannot be said that he is inconsequential. Few presidents have had the impact in their first two years that Donald Trump has had.

Criticism of Donald Trump in the media is so common as to now be effectively inaudible. It is, therefore, not surprising that the media never remarks upon his performances at big events in front of world audiences – the latest example being his speech last week at the 75thanniversary of D-Day. There on the shores of Normandy with the American military cemetery providing the backdrop, ‘Trump being Trump’ consisted of dignity and eloquence on a par with the best presidential speeches in our history.

In keeping with his masterful performances in Warsaw in July 2017, the UN General Assembly in September 2017 and the State of the Union earlier this year, Donald Trump was the very embodiment of an American president. He spoke with purpose and with clarity and with all of the statesmanship that any of us could want from the Commander in Chief.

Speaking of the righteous cause of the young American men who stormed ashore in France in 1944, the president said,

They battled not for control and domination. But for liberty, democracy and self-rule. They were sustained by the confidence that America can do anything because we are a noble nation, with a virtuous people, praying to a righteous God. As they confronted their fate, the Americans and the Allies placed themselves into the palm of God’s hand.”

Certainly, Trump’s coastal elite, secular-left detractors heard nothing eloquent at all in that passage. Many in those rarefied circles are uncomfortable with the idea of a righteous God and most certainly outright reject the idea of American nobility. But in the heartland, you can be sure that the president’s words resonated.

I have come to accept the brash, intemperate Trump. But, I have to say, I really like the Trump I heard speak at Normandy.